I envy Boone Daniels, the hero in Don Winslow’s novel The Dawn Patrol.  And why the hell not? His life is totally enviable.  He surfs. He eats fish tacos. He hangs out in Pacific Beach with his surfer friends, one of which just happens to be a gorgeous blonde who’s also a world class surfer. Even better? When Daniels isn’t living the California fantasy life, he works as a PI, which ranks near the very top of my All-Time Dream Jobs List.

The Dawn Patrol starts off simply: a beautiful and ambitious lawyer named Petra persuades Daniels to locate a witness in an arson case.  From there, the case gets complicated, and midway in, Daniels realizes he’s dealing with much more than an arson case, namely, a sexually-abused girl, a murder masquerading as a suicide, a child prostitute operation doubling as a drug smuggling ring, and, of course, a missing witness. Throw in the back story of Daniels being thrown off the San Diego PD years before for failing to locate a little girl named Rain, and you’ve got more than enough meat on the bone for readers to chew on.  These elements kept me turning pages, but it was the memorable characters that really hooked me, starting with Daniels himself. Laid-back, capable, soulful, and completely void of ambition or pretension, Daniels is a good guy, a flawed hero a reader can root for.  For those reasons I put him in the same class as some of my other favorite modern day PIs like Conway Sax, Elvis Cole, and Spenser.

The Dawn Patrol is a fairly stunning literary achievement in that it is both character-driven and plot-driven.  The casual reader will find it a fun (and quick) read, while the more serious reader will surely notice the many interesting literary devices.  For example, the chapter-lengths, which are sometimes short and chock full of action and other times long and slowly-developing, are surely meant to resemble waves in the ocean. As the narrative builds to a climax, the chapters get shorter and shorter, while the tension is turned up to eleven. (Think: waves crashing on the shore.)  Another cool element for the literary crowd is the shifting narration. Winslow does a near-flawless job of shifting from one character’s head to another, all the while managing to keep up the quick pace of the narrative.

Bottom line, I read the last page of this novel and immediately felt envy…for Daniels’s fictional life and for Winslow’s immense skill as a novelist. 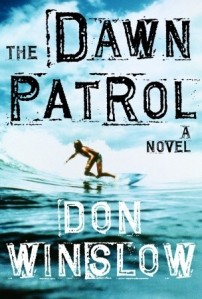