To paraphrase the late great Elmore Leonard: a novelist should cut out the parts that readers skip over.  This is excellent advice, advice which Jack Lacey, author of American Crow, seems to have taken to heart.  The pacing of this novel is frenetic, the scenes chock full of action.

American Crow begins with our hero Sibelius Blake vacationing on a beach in France with his seventeen year old daughter. A freak accident occurs, and the daughter dies, rendering Blake unfit to continue his line of work: finding people who no other bounty hunter or private investigator can (or will) find.  But after a brief fallow period, Blake, a tattooed, rough-around-the-edges Londoner, takes a case in America. His mission: locate an eighteen year old girl named Olivia.  Sounds easy enough, but there are, of course, a multitude of complications. For starters, Blake is wanted by the authorities in the U.S., so he has to sneak into the border via Canada to get to Minnesota, where Olivia was last seen. Once Blake makes it to Minnesota, he follows up some leads and soon discovers that Olivia has joined a local activist group.  This group has gone down to the Cumberland Mountains in Kentucky to protest a very large and very powerful mining company, the head of which is a dangerous man named Corrigan.  That, as they say, is when the fun starts. No spoilers, but Blake runs into trouble at practically every turn, and his troubles keep the reader entertained (and suspended) until the last page.

I did have one or two criticisms of the book, however. One, the author repeatedly uses. . . (dot, dot, dot)  This becomes noticeable almost after the first chapter, and every time it takes the reader out of the story a little. Two, the dialogue of the Southern characters does not, in many places, ring true. Born and raised in North Carolina, perhaps I’m just hyper-aware of Southern speech patterns, and how different they can be from one state to the next, one town to the next.  That said, I found not just some of the dialogue but some of the portrayals of Southern characters, well, caricature-esque.

Bottom line though, Sibelius Blake is an interesting lead character, and there is a cinematic quality to Lacey’s narrative that is addictive.  Too, I think the author’s background as a journalist is a real asset as the writing is taut, the level of detail spot-on.  I recommend American Crow, especially to those hooked on the Jack Reacher series, or those who can’t pass up a lightening-fast plot with solid prose. 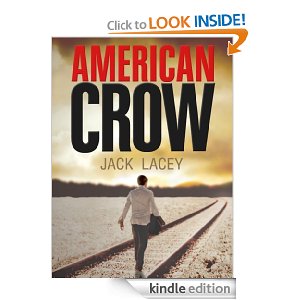 This book, featuring Blake, a rough-around-the-edges, tattooed man who specializes in finding people who cannot be found,